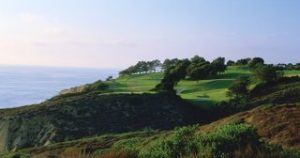 What’s next? Condos on Torrey Pines North? (Do we really need two courses up there?) How about townhouses where Balboa Park Golf Course now sits? Or a spiffy mixed-use development on Coronado Municipal Golf Course.

A number of local golf courses are being eyed as prime sites for development. While the above are all exaggerations, the trend is for real.

The region is facing a housing crunch, after all. And the amount of build-able land is scarce. So golf courses — many of which suck up a lot of precious water and are seeing declines in play anyway — sure seem like enticing targets.
“I tell ya, country clubs and cemeteries are the biggest wastes of prime real estate,” so says Rodney Dangerfield’s character in the movie, “Caddyshack.

Mission Valley’s Riverwalk Golf Course — a 27-hole layout in the heart of the valley — could be transformed into a mega-development, with as many as 4,300 housing units, a new trolley station, a river park and retail and office space.

The developer, Houston-based Hines, expects to send the plans to the city next month. Its price tag? Try $2 billion.

That’s not the only one. The Carmel Highland Golf Course in Rancho Penasquitos, which closed in 2015, was sold a year later for $14.5 million to a developer who plans to build housing on the 114-acre site.

These repurposing plans don’t always go smoothly, mind you. Many times neighbors get miffed at losing green space. They worry that the new homes will bring more traffic and hurt their quality of life.

, however, shuttered golf courses also bring their share of problems. Without maintenance, they become eyesores — and quickly so.

These deals can be complicated too. Selling a course for a significant profit for a new use — particularly housing — is like hitting the lottery, said Steve Ekovich, the national managing director of Macus & Millichaps’ Leisure Investment Properties Group.

Not only does the developer have to be concerned about community protests, the land may not have the proper zoning designation, and it takes municipal action to change it. It could be dedicated green space, for instance. Environmental concerns triggered by chemicals used on courses could derail such conversions too.

“Very few can do this,” Ekovich said.

In Escondido last year, a developer finally got approval to build 380 housing units on the shuttered Escondido County Club, a project that had met a lot of resistance over the years. Neighbors said a housing project would cause even worse traffic and impact their property values.

A bitter back-and-forth fight ensured and included  — of all things — a chicken manure controversy. The owner, Michael Schlesinger, a Beverly Hills businessman, spread that on the course, later saying it was an accident. It stunk up the joint — as well as the surrounding neighborhood. He got fined for doing so.

However, the courts ultimately ruled in his favor when it came to zoning, and the council relented.

Schlesinger also owns a course in Poway, Stoneridge Golf Course, where he also tried to get a housing project OK’d. In that case, though, the property isn’t zoned residential, so he’s been unable to move forward. A ballot measure to build 180 condominiums on the site was struck down by voters. The course was closed the day after that November 2017 vote.

This trend is hardly limited to San Diego. Golf course closures are happening nationwide. Before the recession, the nation saw a golf course building frenzy, with many of them being used to anchor residential communities. Then, of course, came the housing bubble. Adding to the woes was a reduction in the number of golfers.

Look at High Pointe Golf Club in Traverse City, Mich. It was the first design by notable architect Tom Doak. It was sold in 2015 to become a hops farm.

At least Doak had a sense of humor about it.

“My first born turns to alcohol. It’s a pun… my son is fine,” Doak wrote in a post on Golf Club Atlas. “However I just read that the land for High Pointe has been sold to a brewery company to be their hops farm. Drinks are on me!”